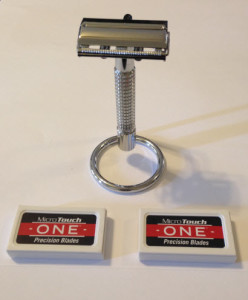 Today I’m going to review the MicroTouch One Classic Safety Razor that you may have seen while watching an infomercial on late night TV.

I first heard of the MicroTouch One razor a few months ago when my girlfriend told me she saw a commercial on TV about an old-fashioned razor.

I thought it was kind of interesting that there would be an ad about a safety razor on TV and I was a little doubtful, but a few days later I saw the same ad which featured Rick Harrison from the TV show Pawn Stars who was promoting the razor.

Fast forward a few months and I’m walking through Target’s kitchen appliance area and I come across an end cap that has “As Seen On TV” products.  One of the products on display was the MicroTouch One Razor.

I was kind of shocked to see a safety razor being sold in a major retailer, even if it was only in the As Seen On TV display and not in the shaving aisle.  Since it was right in front of me I decided to buy one and give it a try. 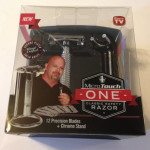 The razor came in a square box set as shown on the right.  The set includes a safety razor, a stand, and two packs of safety razor blades containing six blades each.

Upon taking the MicroTouch One out of the box I immediately noticed the major difference between it and my Merkur 180 Safety Razor.

In order to insert the blade into the blade holder of the MicroTouch One Razor you have to twist the bottom of the handle. 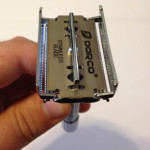 With the Merkur 180 you have to turn the entire top portion of the safety razor screws off and then you have to place the blade between the top and the guard and then screw the entire assembly back on.

Before even shaving with it, I thought that this type of assembly was going to be a major benefit of the MicroTouch one Razor. 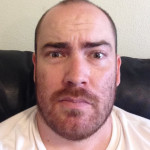 Having unpacked the razor, I decided to put it through the usual stress test: use it to shave a couple of weeks of beard growth.

I’ve found the best way to find out a razor’s strengths and weaknesses is to shave really long hair with it.

Ultimately, shaving longer hair helps me to distinguish how well a razor shaves, even if it wasn’t meant to shave that long of hair. 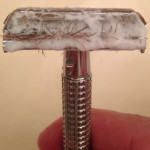 I started shaving the right side of my face first, beginning with the side burn.

After my first shaving stroke I wasn’t too impressed seeing that it had left some hair behind after only an inch or so of shaving.

Also, hair had become wedged between the blade and the guard as had happened with the Merkur 180 with a similar length of beard.

Even though I was a little disappointed I had known that this was probably going to happen and that I couldn’t hold this against the razor. As with the Merkur 180 I had to loosen the head of the MicroTouch razor in order to get the hair out. The design of the MicroTouch made it extremely easy to accomplish this.

For me this design is a huge improvement over that of the Merkur 180. The MicroTouch One doesn’t require me to go near the head of the razor to loosen it. This is a huge advantage safety wise.

With the 180, in order to loosen the blade you have to hold the top of it and turn the handle. This requires you to bring your hands near the actual blade after your hands and the razor are wet from shaving. Although, the likelihood of you cutting yourself while loosening the head of the 180 to get the stuck hair out is miniscule, the danger is still there.

Overall, from a safety and convenience standpoint I think the design of the MicroTouch One safety razor in this regard is superior to that of the Merkur 180.

Shortfalls of the MicroTouch One

The shave itself felt kind of rough. Again this could be due to my longer beard hair and/or my inexperience with the razor. It’s very likely that I wasn’t holding it at the right angle and this could contribute to why the shave felt kind of rough. I’m going to have to shave with it a few more times and then shave with the Merkur 180 to jog my memory to see if there is a difference.

I was able to shave all areas of my face. There were a few problem areas. I found it a little tricky shaving under my jawline and under my chin. This was probably just due to the length of my hair. I’m sure while shaving just a few days of hair growth these areas won’t present as much of an issue.

The only other area that I found to be tricky was right underneath my nose. The curve of the top of the razor pretty much made it impossible to get a couple of hairs going with the grain on the very top of my upper lip right where it meets my nose. This problem was easily solved by turning the razor and making another pass going against the grain.

Overall, I think the razor is a solid buy at it’s price point. I purchased it for $22 at Target. This is cheaper than the $35 I spent for the Merkur 180 on Amazon.

I feel this is a pretty good buy since you get a razor stand included with it. The Merkur 180 I purchased off of Amazon didn’t include a razor stand and I still haven’t purchased one for it, so it was nice that the MicroTouch One came with a stand.

My major complaint about this razor is that I was unable to shave long hair without it becoming clogged.  I tend to shave on a weekly basis, so this is a problem that I have to deal with.  I don’t think there will ever be a razor that deals with a long beard better than a straight razor, Dovo shavette, or feather razor.

However, I realize that a lot of other people have different shaving habits.  If you shave multiple times a week I would definitely recommend this razor.

If you want to give a shot you can always try tracking it down at Target in the As Seen On TV aisle. Just try asking a Target employee. If you prefer purchasing online you can find it online at: