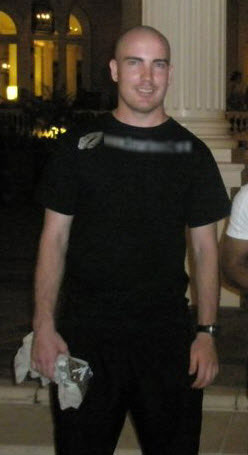 Hey there! Welcome to my site dedicated to straight razors and shaving. It’s my hope that I will be able to contribute positively to your “shaving journey” wherever it takes you and whatever razor it leads you to. That’s some pretty good BS, right? Well, let’s get into what this page is really about, which is me telling you a little about myself.

My Foray Into Straight Razors

Like a lot of men, I grew up and spent a large part of my life shaving with a typical cartridge razor. My first razor was a Mach 3 razor. After I bought that razor I shaved with a Mach 3 razor for the next ten years of my life without even knowing that an alternative razor existed. I vaguely knew of electric shavers, but they weren’t really my style or something I really considered as a possibility.

One year while traveling out of town for work I was trying out NetFlix and seeing what movies I could stream online in my downtime. It didn’t take me long to watch all the good movies, so I ended up watching obscure documentaries that I had never heard of before.

One documentary was called “No Impact Man”. In a nutshell, it’s about a man and his family who try to live sustainably in New York City without having any negative impact on the environment/planet. I found it fairly interesting and decided to check out his website.

I believe it was on this website when I really first heard of a straight razor, and reusable feminine hygiene cups for that matter(you probably didn’t need to know about the second part, but I felt the need to share…lol.) ***Side Note*** If that wasn’t enough for you, let me introduce you to the wonders of the SheWee and GoGirl(don’t ask me how I know about those because even I can’t remember at this point and totally forgot about them until writing this post), but I digress. ***End Side Note***

Anyways back to the point at hand. In one the posts on the author’s website, he suggested using a straight razor as a small way men could reduce the amount of trash that goes to dumps and landfills.

While I’m not really a huge “eco-responsible”, “save the planet” type of guy, although I have developed some eco-friendly habits in recent years from a mainly utilitarian standpoint such as carrying around a metal water bottle instead of using bottled water, for whatever reason, shaving with a straight razor piqued my interest.

The main thing that caught my eye was using straight razors in order to not be forced into buying replacement cartridge razors anymore, especially while I was still in a profession that mandated that I be clean-shaven most of the time. Finally, I could break the bondage from the almighty razor manufacturers and awaken from the nightmare of being force to buy new razors when last month’s blades invariably dulled.

While I was really interested in shaving with a straight razor, it was a big leap between “hey, that’s kind of cool” to “I’m going to buy a straight razor, shave my face with it, and hope I don’t come out with my face looking like I tried to shave it with a weed wacker. Unfortunately, a couple of years prior I had the unfortunate experience of a barber at an upscale hotel do exactly that. Add the cost of the razor to the fear of shaving with one and the end result is it can be a leap that is hard to take, even with the help of a really supportive straight razor enthusiast community.

Ultimately, my first “straight razor” ended up being a Dovo Shavette. I really didn’t want to spend several hundreds of dollars only to find out straight razor shaving wasn’t for me. I figured that, although not quite the same, it would be similar enough to where I would know if straight razors were my thing or not.

With my mind made up and me being the somewhat impulsive/impatient person I am, I sought out a place I could buy a Dovo Shavette. I ended up finding a place called “The Art of Shaving”, you’ve probably seen one in any decent sized malls, and I bought a Dovo Shavette from them.

Now I had the tool for the job, but I still didn’t have the courage to use it on my face. I decided to start on a body part that wouldn’t be too disfiguring if I totally messed up and for some reason applied enough pressure to cut through a steak, which looking back was a totally irrational fear, so I ended up doing a test run on my left forearm.

Protip: If you do a test shave on your forearm, do it on the inside of your arm where it will be a little less obvious that you have a patch of hair missing.

Super Protip: If you ignore my previous tip and shave the top part of your forearm and have a patch of hair missing and decide to shave your entire arm to hide the fact that you had a patch of hair missing, then go ahead and shave your other arm as well. You won’t have people asking why one arm is shaved and one arm isn’t and you’ll also get the added practice before you start shaving your face with it.

Finally, the time came and I shaved my face with it for the first time. I can’t remember how the shave went and if I nicked my face, I probably did, but I was hooked. Four months later I bought my first true straight razor, which was a Dovo, and enjoyed shaving with it immensely. Although I mainly shave with a Japanese Feather Razor these days, which is a razor that is  similar in concept to a shavette but with the cost of a straight razor, there is nothing like shaving with a true straight razor.

What I’m Trying To Accomplish With This Site

To put simply, I’m just trying to spread the word about straight razors and other alternative razors. I remember the feeling of helplessness standing in the razor aisle looking at the prices of replacement cartridges and feeling powerless to do anything else, but shell out another $20-30 for razors like I had done the previous month.

I now know the joy and true satisfaction of feeling the weight of a real straight razor and not some cheap piece of plastic as I shave with it using the skill I have developed over the years. To be honest it’s very relaxing to be able to tune everything out and focus on the sole task of shaving my face and have it be an enjoyable experience versus it just be an unwanted task I had to do.

If you ever need a hand or have any questions, feel free to leave them below and I will be more than happy to help you out.