Who Makes The Feather Razor? 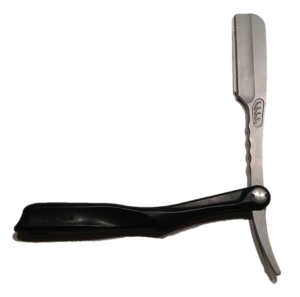 My Experience With the Feather Artist Club SS Razor

Shaving My Face With The Feather “AC” SS Razor

Where You can Buy A Feather Razor

Who Makes The Feather Razor?

The Japanese Feather Razor is made by the Feather Safety Razor Co. Ltd. According to their website, the company was originally founded in 1931 under the name Seki Safety Razor.

The Feather Safety Razor Co manufactures a variety of blades including barber/beauty blades, medical blades and industrial blades. The focus of this page will be on their barber blades.

The razors they make for shaving come in three different models: DX, RG, and SS. Each model comes in a folding and a non-folding variety.  According to West Coast Shaving’s website, the RG model was discontinued and replaced with the SS model.

You will occasionally see the model prefixed with either the words “Artist Club” or “AC” both these mean the same thing. “AC” is just simply the first letters of the word “Artist” and “Club”.

Below you can see images of what the “SS” and “DX” models look like.  The “SS” comes in three different colors which are shown below.  The “DX” can be found with either a wood handle or a imitation pearl handle made out of resin.

I personally don’t have any experience with the non-folding variety so I will not talk about it here.

The folding feather artist club razors are comparable to Dovo Shavettes although there are two major differences between a feather razor and a Dovo Shavette: weight and the way the blade is held in the handle.

The feather razor(blade and handle) weighs in at around 44 grams. This is the first thing I noticed when I picked one up for the first time. I could feel that it was significantly heavier than the Dovo Shavette and it seemed like it almost weighed as much as a traditional straight razor.

For comparison, the Dovo Shavette weighs around 30 grams give or take a gram depending on the insert and blade you have in it. This means the Japanese Feather Razor is a whopping 46% heavier than the Dovo Shavette.

The Dovo shavette on the other hand uses inserts to hold the blades. You remove the inserts from the handle, put the blade in the insert, and put it back in.

You have four different styles of blades to choose from with the Feather Artist Club razors.  They are:

Both the Professional Super and Light Blades come in packages of 20.  I don’t have any product images to show you yet, but as soon as I do I will upload them.  I’ve taken some photos of the packs that I have personally purchased, but I need to pretty them up a little bit before posting them online. 😉

The different style blades are designed for different uses.  I am in the process of writing more about them and I will post the link when I have finished.

My Experience with the Feather Artist Club SS Razor

I bought this razor right after I started growing my beard out.  I had recently gotten out of the Navy and didn’t feel like shaving any more.  I also decided to grow the hair on my head out so I didn’t do any shaving at all for 3 months.

After 3 months I got tired of the hair on my head and decided to shave it off.  This was the first time that I used the feather razor.  It went relatively smoothly except for the occasional nicks.  The nicks are mostly, if not all, due to me not being proficient at shaving my head with any type of straight razors.  There are a lot of different curves on my head to account for and I’m still learning.

The razor itself performed beautifully.  It cut through the hair easily and I really enjoyed the shave.  The only down side was some hair would get caught between the blade and the holder.  I think this is mostly due to my longer hair.  If I was shaving everyday with it then I do not think this would be an issue because the shaved stubble wouldn’t get caught.

Shaving My Face With The Feather “AC” SS Razor

When I finally decided to shave my 6 month beard off, I decided to use my Feather Artist Club SS Razor.  I knew that the razor would easily handle the beard, but it really shocked me just how easily it cut through the beard.  Shaving my beard off was way easier than shaving my head.

I barely put any pressure at all on the razor and it just sliced right through the hair.  While shaving my beard off the thought popped into my head that they picked the perfect name for their razor by calling it a “feather” razor because all you need to cut through your hair is a “feather” touch.  It was quite an enjoyable experience.

My follow on shaves have been equally enjoyable.  Right now I’m shaving my face about once every two weeks and it handles the beard growth beautifully.

Where You Can Buy A Feather Razor

Most websites that sell straight razors or wet shaving supplies will sell the Feather Artist Club razors.  Different sites call them by different names, you’ll typically find them under the following names:

Depending on the site you might have to look for them underneath the category of straight razors.  If worse comes to worse and you are unable to find them on a site try using the site’s search box or you can leave a comment and I’ll help you find the right page.

When you buy the handle remember to buy blades for them too as they do not come with blades.  Places you can buy both the handle and blades include:

West Coast Shaving(based out of California)

Shave Nation(based out of Illinois)

The price is going to vary depending on what website you buy them from.  A rough rule of thumb I’ve developed just by looking at prices across multiple sites is:

If you have any questions or comments feel free to post them below.  🙂