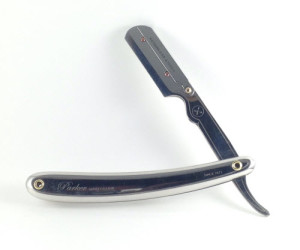 As described in our general page about Parker shavettes, the Parker SR1 shavette razor is made almost completely out of stainless steel.

I’m not particularly fond of people calling it a straight razor because it’s not.  A straight razor is made out of one continuous piece of steel that needs to be honed in order to produce a “shave ready” edge.  Shavettes, on the other hand, use replaceable blade.  I think this is a distinction that should be respected, but often is not. 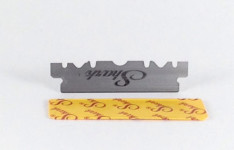 The SR1 takes half of a DE blade.  A lot of times you will find the SR1 being sold with 5 shark blades.  The blades that came with mine were only one-sided so you didn’t have to break them in half as you would normally do with regular DE blades.

The Parker SR1 isn’t built to be disassembled.  In order to take it apart you would have to drill out the pins that are holding it together.  I’m not sure why someone would want to take it apart other than to possibly replace the handle with some custom handles. 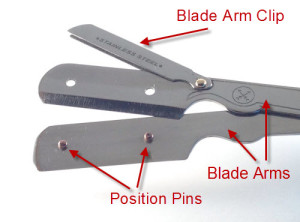 To insert or remove the blade the first thing you have to do is to lift up the blade arm clip.

***Warning – You need to be careful that your thumb doesn’t slip other wise you can end up with a nasty cut.***

The second step is to separate the blade arms.  You have to pull the blade arms far enough apart that the Position Pins on one blade arm are no longer in the corresponding holes on the other blade arm.

At this point you’ll be able to pivot the blade arms away from each other.  From here you either need to remove the blade if you are taking the blade out, or position the blade against the position pins. 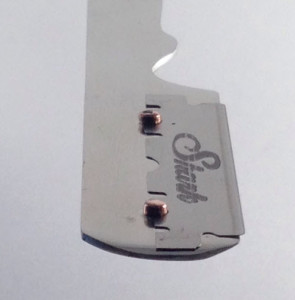 Once the blade is inserted or removed, you just reverse the process to close the razor back up.

The biggest thing to be careful of is to make sure that the blade remains in its proper position against the position pins while you are closing the blade arms together.

Read our Parker SR1 review.  In this review we discuss in depth, what we like and dislike about the Parker SR1 and whether we would recommend it as a shaving razor.