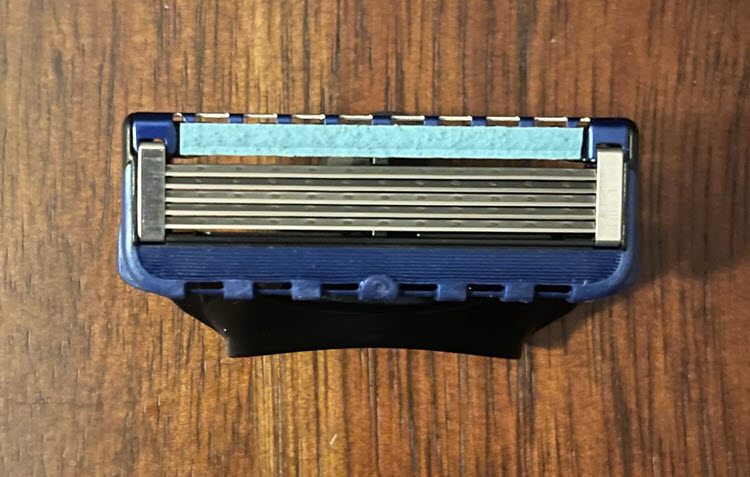 Recently, I had an inquiry about a Proglide Fusion cartridge duration test on Youtube that I started back in 2013 where I would shave one side of my face with the same cartridge and then shave the other half with a brand new cartridge.  This method would allow me to compare how many good shaves I could get out of the cartridge before the shave quality started degrading.

Unfortunately, I never completed the test.  I made it through 11 shaves, but then became busy with other things and forgot about it.  At the 11 day mark I did notice pulling in my mustache and chin area.  However, I think the cartridge did have a few more shaves left in it, if not more.

Below are some notes I kept in a journal outlining my experience while I was actively doing the shave test.  I may return to do this in the future at which point I will post my experiences in a new blog post.

Today was the first day of the shave test to see how long one cartridge razor will last me.  Previously I had attempted to shave half my face and head with the same cartridge and then use a brand new cartridge to shave the other half of my face.  I got sidetracked with that project and didn’t follow through so I decided to do this one instead.

I think this is going to be a little bit more subjective than my previous unfinished one because I will have nothing to compare the razor to.  As the performance of the blade deteriorates over time I will also get used to it overtime until the point that it becomes so unbearable that I actually notice the razor is not performing well.

Gillette claims that one cartridge should last 5 weeks.  I don’t know what this claim is based off of.  Is it based off of shaving every day for five weeks?  Every three days?  It really is hard to quantify.  Everyone shaves with a different frequency and everyone’s beard is a little different.  Some men have thin beards, some have thick beards, some have coarse hair, and some have fine hair.  I think these variables definitely determine how long a cartridge will last.  With that being said, the length of time the cartridge lasts me might not be the same length of time that it lasts you.

This setup actually does give the cartridge razor a slight advantage.  In the  past I’ve noticed that I am able to get more shaves out of a dull mach 3 cartridge razor just by using shaving soap and a badger hair brush to lather up.  I’m not quite sure why this is.  It may be because it lubricates the skin better and lifts the hair more.  If you’ve never tried a badge hair brush and shaving soap I highly recommend that you try it.

Tonight’s shave went well.  I didn’t have any irritation.  I did manage to give myself a slight nick on the left side of my chin.  Don’t ask me how I managed to do that because the last couple of times before this I had shaved was with a Dovo shavette and I didn’t nick myself at all and those are suppose to be way more “dangerous” than cartridge razors.

Well that’s all for today.  I’ll add to this tomorrow.  In case you’re wondering I am typing this up on my computer each day. I will post it and make it live on the blog once I have typed everything.

Shaving was a little bit rougher today.  I think this might have been due to me not being as slow and meticulous as yesterday.  On the right side of my neck, right below the jawline I have a calic.  There is a circular patch of hair that grows in all directions.  When I was shaving that area I think I passed over it to fast, which didn’t give the razor enough time to adjust to the angle of my neck.  Kind of similar to bottoming out a car or truck.  Other than that the shave was pretty uneventful.  The razor still seems to be shaving pretty well without any discomfort(not counting the incident with my neck.  Well that’s pretty much it for today.  Not a whole lot to report.

It’s been a while since I last shaved with the fusion proglide.  I did do one shave with it since my last shave, but I can’t remember the exact date that I shaved with it.  When it’s been more than a few days since the last time I shaved I use a Dovo shavette since the Fusion proglide becomes too clogged up with hair to be an effective shaving instrument.

From what I do remember of the shave is that it is still shaving well.  I think I will change the way I shave the part of the neck where I have a calic.  I think I will try going up first versus down, to relieve the slight discomfort I get when I shave there.  An interesting note is that I  do not get this discomfort shaving downward with a shavette or straight razor over the calic.  I will update you the next time I shave with the Fusion proglide.  This has been the third shave with it so far.

I decided to shave before going out tonight.  My stubble was about ⅛”, so it had been at least a few days since I last shaved, but no more than a week.  The proglide still cut well.  However, the blades became clogged with the longer hair.  Furthermore, rinsing the blade under water would not remove all of the hair.  I would have to use my thumb to push down on the blades to remove the hair.  If I didn’t do this then the quality of the shave would greatly degrade as I would not get as close of a shave due to the hair clogging the blades.

This can reinforces what everyone knows about cartridge razors which is that they suck when it comes to shaving anything more than a day or two worth of stubble. The blade still is sharp.  However, this only shave #4 with it.  We’ll see what happens we get to shave #14 if the blade even makes it there.

Tonight, I shaved the calic on my neck going the opposite direction than I usually go(with the grain).  This eliminated the slight pain I would have when shaving that area.  This may because I may have more hairs growing in an upwards direction in that area, so in order to shave with the grain I shave upwards first.

Shaved tonight after a couple of days of not shaving. There was only about 3 days of hair growth.  The last time I shaved was Tuesday the, 29th of October.  I also shaved on the 28th as well.

Tonight’s shave went relatively smoothly.  My stubble kept on getting stuck in between the blades of the razor and the force of the water wouldn’t be enough to knock it out.  I would have to resort to push against the blades with my thumb, opposite the cutting direction, in order to remove the stubble.  This isn’t the first time it has happened.  I’m kind of surprised that three days of stubble gets stuck in the blade.  It really is looking like the Fusion Proglide is good only if you plan on shaving every single day.

I am starting to notice it starting to dull a little bit.  It’s not enough to make me want to change cartridges, but I do know that’s it’s not as sharp as a brand new one.

It has officially made it 7 shaves.  That’s 25% of the way to Gillette’s claims of one month.  I can see it lasting for 14 shaves(days), but I really don’t see myself getting 30 shaves out it, but who knows?  Talk to you later.

Shaved today.  This was the ninth shave.  If you are keeping track I skipped shave number eight.  Shave number 8 happened about a week ago on November 8.  I forgot to write about it then and so I’ll just write about shave number 9.

The razor is still shaving pretty well.  As I mentioned previously the razor tends to clog up pretty easily with one weeks worth of beard growth that flowing water won’t remove by itself.

Today I found a new use for the single blade located the opposite sides of the other blades.  It is pretty useful for the first pass below the side burns.  It’s a lot easier to line up than the side with the five blades stacked.

The shave is still a little rougher than with a brand new cartridge, but still well within the tolerable range.  Well, that’s it for now.  Until next time.

Well, it’s been a little over two weeks since I last shaved.  It seemed like it had been at least three weeks, that is what is good about keeping this shave log.

Shave number ten was pretty rough.  There was quite a bit of pulling, especially around the chin and mustache area.  However, I am going to attribute this to the length of my beard and not the blade itself.

As I was shaving the razor would fill up with hair rather rapidly and leave strips of hair unshaved.  I would have go back over the same area multiple times just to get all of the hair off.  As a result this drastically increased the amount of time it took me to shave.

If I was someone prone to super sensitive skin I would probably have had a severe case of razor burn due to the amount of passes I had to do to get a clean shave.

The longer hair makes it harder for me to judge the performance of the razor, so from now on I am probably going to let my beard grow a maximum of three days between shaves.

Shave number 11 and the Fusion still seems to be going pretty strong.  It’s still cutting the beard pretty well.  I did one pass with the grain and one pass against the grain.

However, even with just four days growth the hair was getting stuck in between the blades and running water was not sufficient to clean it out.  I still had to run my finger and thumb across the blades to get the hair loose(opposite the cutting direction of course).

The mustache area is where I am really starting to feel the Fusion pull now.  This happens to be the area where my facial hair is the most dense followed by my chin, so it’s no surprise that I’m noticing the pulling on this part of my face first.

This does bring up an interesting point though.  There is a limit to how many blades the cartridge razors can pack onto any given razor head.  If you put too many blades on and you won’t be able to get a close shave in curved areas such as the jaw line.  I have found this to be a problem with Headblade’s HB6 blades when I tried using them to shave my face.

If you put the blades too close together then you have the problem of excessive clogging by hair and dead skin.  This was really noticeable with Headblade’s HB3 blades.

Well that’s all I have to say for now.  I’ll keep on shaving until it gets uncomfortable or until I hit the 30 shave mark with this cartridge.