A Review of Harry’s Razors 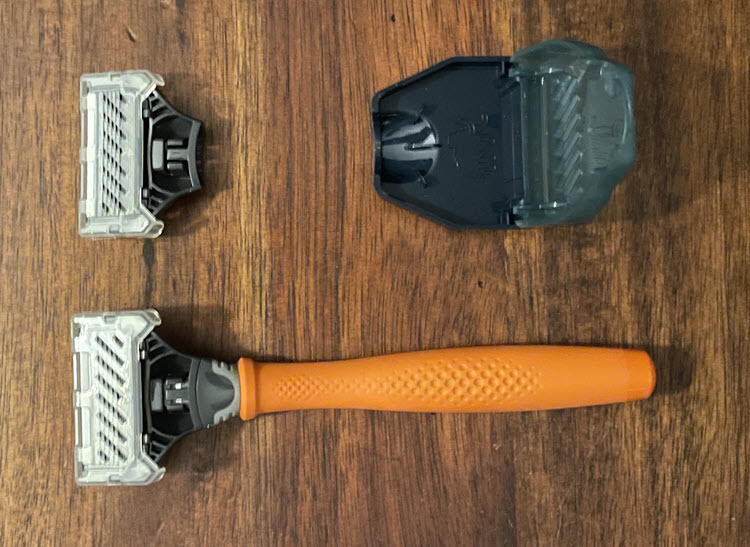 Shave Life:  Sixty-Eight shaves during testing (while ignoring some minor rusting on the precision trimmer.)

Failure Modes:  Rusting of the blade if you don’t take proper care of it.  Failure of the rubber flex “hinge” after sixty-eight shaves.

Opinion:  Definitely gives other cartridge razors a run for their money.

I initially encountered Harry’s razors while researching razors online years ago. They were the first cartridge razor brand outside of the usual suspects of Schick, Gillette, etc that I had seen in a long time. I always have been curious on how well their razors perform.

I finally caved into my curiosity when I saw them at Target and picked up the orange handle model to test it out and I figured I would write a review of Harry’s razors while I was at it. If you’re pressed for time here’s the quick and dirty summary:

Overview of the Razor

What Comes in the Box

When you open up the box you’re going to be greeted with the following items:

The packaging material  appeared to be made of some type of compressed paper or cardboard, kind of similar to the material that egg cartons are made out of, instead of plastic packaging. I’m not a huge save the planet guy, but there’s no denying the oceans are filled with micro plastics and I think any reduction in plastic packaging is a good thing. 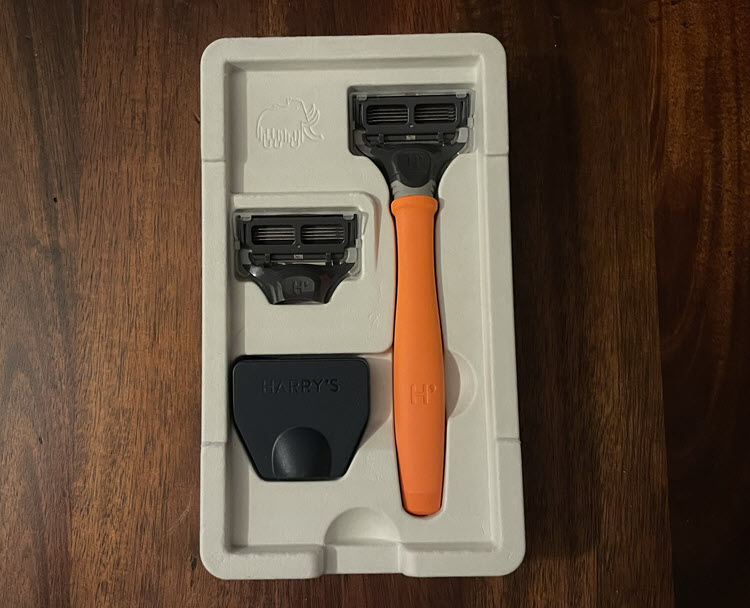 The first thing that stuck out at me was the weight of the handle when I picked it up. I guess I had associated a rubber handle with plastic in my head and anticipated a light handle more akin to a disposable razor.

However, it’s definitely heavier than I expected. The razor packaging does say it has a “weighted core” which indicates the weight of the handle is an intentional design choice and didn’t happen by accident. I feel the weighted handle adds to the shaving experience.

Its most direct competitor seems to be the Gillette Fusion 5 which is similar to the Fusion ProGlide razor, but lacks the Flex Ball. I’ll have to do a shaving test with a Gillette Fusion 5 later on so I can make a good comparison between it and Harry’s razor.

On the bottom of the razor package it states that “Our blades are designed for your face and we don’t recommend them for head shaving.” I am using the razor for something it wasn’t intended for, but I haven’t had any issues shaving my head with it.

Here’s a summary of the things I have noticed so far:

Difficult to reach areas: The five-bladed side of the razor doesn’t shave as close to the skin in the area between the chin and lower lip, directly underneath the nostrils, and a crease in the back of my head.

The precision trimmer on the back of the razor is useful for getting these hard to reach areas.  Also, shaving against the grain seemed to shave these areas well.

Doesn’t handle long hair well: The first time I shaved with it my beard was 1/4″ long and 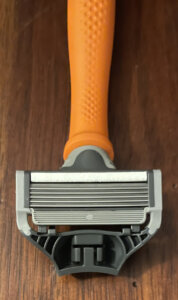 A week’s growth is manageable, but there is a little bit more effort getting the hair out of the blade.  Ten days of growth is about the upper limit of what I would shave with it.

I’m not sure how much that is due to using a shaving cream instead of your typical shaving gel/foam or just splashing water on my face like I used to do. I might have to do another test with the other cartridge and see how it holds up with a regular can of shaving gel/foam.

I am also shaving with the grain for the most part and this might have something to do with it as well. The only exception is I am shaving against the grain on the back of my head and I’m not noticing any discomfort. I’ll keep shaving with it until it becomes uncomfortable to continue using it.

Although not bad by itself, I can see it does provide less clearance between the blades and could potentially cause the razor to clog easier.  On my very first shave some longer hairs did get stuck in the back of the razor. This did cause some clogging in between some blades.

If you’re getting a mixture of shave soap/cream/foam and hair particles stuck between the blades and it won’t wash out, then you might want to look at the back of the blade and see if there are longer hairs stuck there.

There was some marketing language on the razor package that I wanted to discuss: 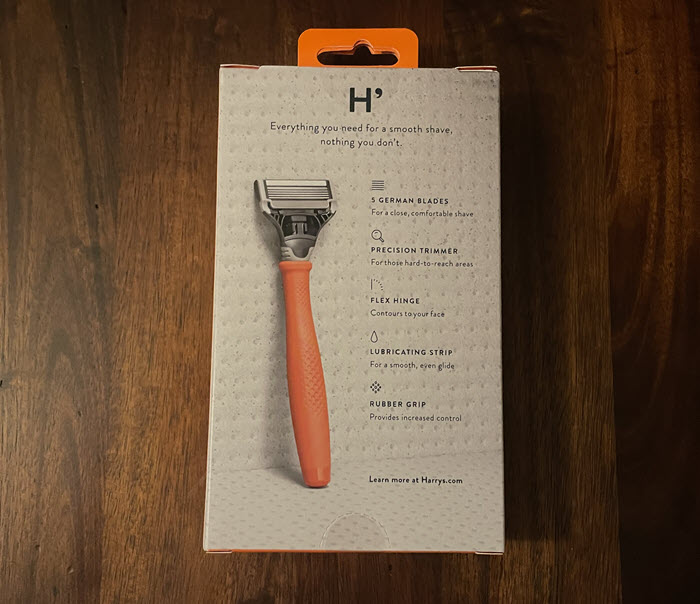 Back of the Harry’s razor package.

Precision Trimmer: I don’t think the package really does a good job of describing what a precision trimmer is.  In case you’re wondering, the precision trimmer is the single blade on the back of the razor.  It’s located opposite of the lubricating strip and is easy to miss if you don’t know it’s there.

Lubricating strip: It’s there, but I’ve always had my doubts as to how beneficial these are. I kind of think it’s a marketing gimmick that every razor has now because every razor has one.

Flex hinge: The flex hinge moves nicely with the contours of my face and head. There are some areas where you have to go against the grain for optimal shaving. The flex hinge doesn’t do much directly beneath the nose.

The presence of a flex hinge is probably the major difference you’ll find between modern cartridge razors and disposable razors. It’s also what makes them easier to shave with than a safety razor.  The razor automatically moves with contours of your skin instead of you having to adjust the angle using the position of your wrist.

Interestingly enough, the flex hinge was the limiting factor in the second cartridge razor.  The rubber “hinge” tore which caused the cartridge razor to not have anything to pull it back to its normal alignment.

I never realized how crucial it is to a cartridge razor to have something that pushes or pulls the razor cartridge towards your face.  If you don’t have this, then the cartridge simply falls away from your face.

Rubber grip: I definitely didn’t have any issues holding onto the razor.

Where to Buy Harry’s Razors

I bought mine at Target. You can find it on Amazon or other major retailers both on and offline.

Given it’s performance, it seems to be a strong contender to supplant the other cartridge razors in the market.  The razor blades will rust or the rubber flex hinge will tear before the blades dull.