What Is The Best Single-Blade Razor? 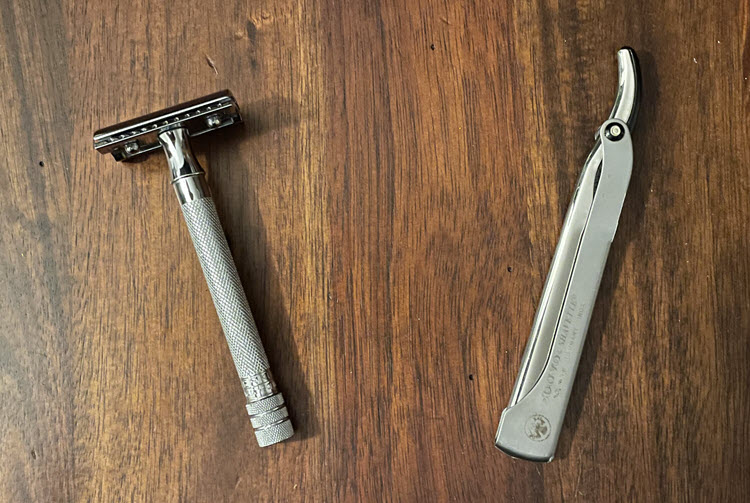 The Dovo shavette has the advantages of a straight razor, but doesn’t require the upkeep an maintenance of a straight razor such as stropping and honing.  To shave with it you just pop in a blade and you are ready to go.  The Dovo shavette doesn’t clog like a traditional multi-bladed cartridge razor.  Since there is only one blade there is no other blade for the hair to get stuck between.  On a side note, if you are shaving a couple of weeks of growth some hairs might get stuck between the blade and the insert that holds the blade, but these hairs are a lot easier to “un-stuck” than the hairs that become stuck in a cartridge razor.

The one drawback I didn’t like about the Dovo shavette was the mess it made.  Now most people won’t have this problem since they probably don’t have as irregular of a shaving pattern as I do, and most likely would never shave their head with a shavette.

When ever I shaved a few weeks of hair growth off my head, the shaved hair would fall off my scalp and onto my neck and shoulders.  Most of the hair I can manage to get it to drop into the sink, but I invariably end up with shaved hair all over my neck and shoulders.  I just assumed that this was a cost of shaving my head with a shavette and hadn’t found a better way.  The only alternative was to either buzz my head with clippers(makes a mess) and then shave it with a cartridge razor or take an extremely long time shaving with a cartridge razor(45 to 60 minutes.)

A few days ago I shaved my head for the first time with a safety razor.  At first all that I noticed was that the hair was getting clogged between the blade and the guard of the Merkur 180.  I was expecting this to happen, so it didn’t really bother me.  I was actually pleasantly surprised at how easy it was to get the safety razor unclogged.

It wasn’t until after I was done shaving that I realized what made the safety razor slightly better than the Dovo shavette:  lack of a mess.  Since the hair gets caught in between the guard and the blade, there isn’t a chance for the hair to fall off of my head and onto my neck and shoulders.  As a result, when I was done shaving my head all of the shaved hair was in the sink and no where else.

Add to it that the blades are extremely cheap(anywhere from 4 to 50 cents a blade)and will last for multipe shaves, and I think that is cause to make it the best single-blade razor when you take into account everything.

What do you think is the best single-blade razor?