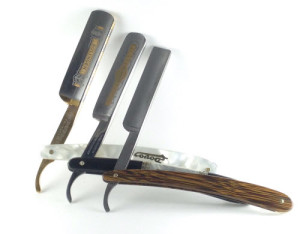 Straight razors are an item that used to be widely prevalent before the turn of the 20th century, at which time the safety razor was then invented.

If you are not sure what a straight razor is, all you need to do is look to the right and you will see a picture of three straight razors sitting in a row.

For the past century the shaving market has been dominated by huge companies manufacturing the cartridge razors everyone has been accustomed to and the straight razor has been forced to take a back seat in the market.  However, there has been a resurgence in the popularity in the straight razor in recent decades.

Most people will only have a passing knowledge of straight razors.  Straight razors have been shown in some main stream movies, but in the movies in which they are shown they are used as some sort of tool to maim or torture(Reservoir Dogs with a man getting his ear cutoff by one) or as an implement to do something other than shaving(Kill Bill Volume 2 where Beatrix uses one to cut through ropes while buried in a coffin.)  The “Skyfall” James Bond is probably the most recent mainstream movie to show a straight razor doing what it was designed to do, which is to shave.

While in the past it was difficult to setup a store in an area with sufficient demand for straight razors and other vintage shaving items, the internet has allowed  proprietors to cater to shaving enthusiasts throughout an entire country and even the world.

The relative recent advent of forums and the even more new arrival of social media sites has helped to popularize and spread the practice of straight razor shaving.  People everywhere are starting to realize that you don’t have to pay $4 a cartridge to get a decent shave.  On top of that they are realizing that they can turn what once was a chore performed grudgingly for work into a pleasurable ritual that you can’t wait to do.

You may even be surprised that Proctor & Gamble, owner of Gillette, has actually gotten back into the straight razor game(at least indirectly.)  In 2009, Proctor & Gamble purchased the high end chain of men’s shaving stores called “The Art of Shaving”.

While they most certainly didn’t purchase the company because they sold straight razors and DE razors, they also didn’t stop selling those traditional shaving items after the purchase.  If you walk into any “The Art of Shaving” store or go to their website you will be able to purchase a straight razor.

There are also straight razors being produced in Pakistan and China that are for the most part considered to be low quality.  When people have purchased them it takes a lot of work to put a shaving edge on them, and then the razors are reported to lose their shaving edges after only one shave.

As a rule of thumb, if you buy a brand new straight razor for $10-$20 and it was manufactured in China or Pakistan, chances are it’s not going to shave very well.  You are better off saving your money and using it to buy a straight razor that has been made by one of the reputable manufacturers.

Straight razor shaving has seen a revival in the past few decades.  I think the straight razor’s trend in popularity is only going to continue to increase as more people continue to discover the benefits and pleasures of shaving with a straight razor.