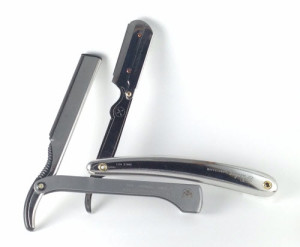 The term “shavette” refers to a type of razor that is similar to the look and feel of a traditional straight razor.

The key difference between a shavette and a straight razor is that the shavette takes a replaceable blade while the straight razor has to be honed and stropped in order to maintain its shaving edge.

There are quite a few models of shavettes, but the most popular and widespread models are the:

One of the key benefits to using a shavette is the cost of its blades.  Most shavettes use the same type of blade as a safety razor, which is also called a double-edged(DE) razor.  Depending on the brand you buy and the quantity you buy in, you can buy DE blades for anywhere between 7 and 75 cents.

This offers significant savings compared to the $4/cartridge brands that dominate the retail stores’ shelves.  In most cases you have to snap the DE blades in half to use them, but there are brands that sell one-sided blades for shavettes.

The way in which a shavette holds a DE blade varies from model to model.  Some shavettes hold the DE blade by enclosing it inside a plastic insert.  The insert and the blade are then inserted into a metal holder that is attached to a handle.

Another difference between a shavette and a straight razor is that shavettes are significantly lighter than straight razors.  Some people have described shaving with a shavette as dragging a “ripped soda can” across their face.

I really don’t agree with that statement, and think the only real reason they use that comparison is due to the fact that the shavette is so light.  I started out shaving with shavettes and can assure you the blades are really sharp and can cut through hair just as easy as a straight razor.

Shavettes Are A Great Starting Point

Which brings me to my next point.  Shavettes are a great introduction to straight razors even though they aren’t a true straight razor.  Since shavettes are so similar in the shape and design of a straight razor, they allow you to gain the muscle memory necessary to hold a straight razor at the proper angle in order to cut through hair.  If you don’t get a good shave due to the razor not cutting hair, you know it’s due to your inexperience at this new way of shaving and not due to the sharpness of the shaving edge.

No Honing Or Maintenance

Straight razors need their shaving edge to be “shave ready” in order to cut through hair.  What this means is that the straight razor has to have an edge that has been honed properly and sharp enough to where it will easily cut through hair.  If you buy a straight razor that hasn’t been honed, hone it yourself and then get a crappy shave, it will be hard to pinpoint the cause of the poor shave.  This is because you don’t know if you honed the razor properly, if you “rolled the edge” while stropping it, or if you simply haven’t developed the requisite shaving skills in order to get a good shave with a straight razor.